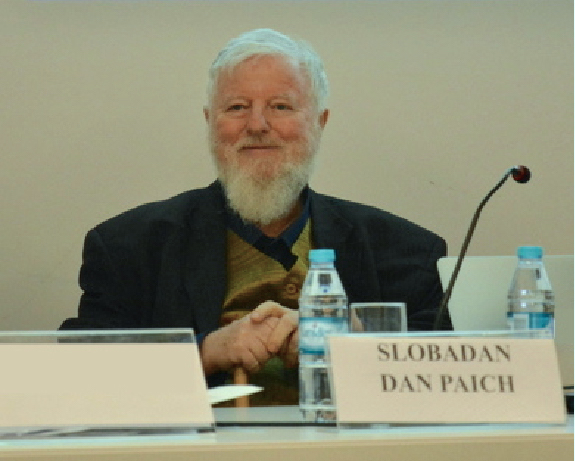 Chair of the Symposium

Slobodan Dan Paich was born in Yugoslavia after the Second World War. He lived in England from 1967 to 1985. In London S. D. Paich taught the History of Art and Ideas, Architectural Design, Design Theory and Art Studio from 1969 to 1985. From 1985 to 1992, he taught at the University of California at Berkeley. With colleagues and concerned citizens he founded the Artship Foundation in 1992, and has been its Executive and Programmatic Director and Principal Comparative Cultural Studies Researcher ever since. He also served as a board member of the Society of Founders of the International Peace University in Europe and Asia from 1996 to 2017. From 1996 to 2002 he lectured in Berlin and Vienna and chaired the Committee on Arts and Culture.

Since 2011 Slobodan Dan Paich has participated in annual conferences at the Romanian Universities of Timişoara and Sibiu and was appointed visiting professor at University of Medicine and Pharmacy, Anthropology-Cultural Studies Section, Timişoara, Romania in 2016.

Slobodan Dan Paich has delivered numerous papers at international conferences as keynote speaker and presenter based on his courses, lectures and research since 1969, which address tangible and intangible heritage, comparative cultural studies and migration of peoples, craft technics and ideas.

The courses he initiated in 1969 at the college and university level broadened the scope of art history into the History of Art and Ideas. These courses included geographies larger than the European cultural sphere and an interdisciplinary, across-time curriculum was developed that included ancient and indigenous people as differently cultured, ingenious and refined rather than primitive. 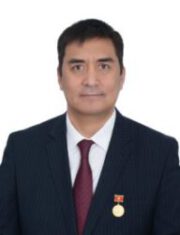 Duishon Alievich Shamatov is an Associate Professor in the Graduate School of Education at Nazarbayev University. In the NUGSE, he teaches courses on Educational Leadership and Research Methods. Duishon received his Master of Education degree in Teacher Education from Aga Khan University Institute for Educational Development (AKU-IED). He obtained his PhD in Education from the Ontario Institute for Studies in Education at the University of Toronto in Canada in 2005. His doctoral thesis was titled “The Beginning Teachers’ Professional Socialization in Post- Soviet Kyrgyzstan: Challenges and Coping Strategies”. He has experience of conducting research and consultancies in Kyrgyzstan, Kazakhstan, Pakistan, Tajikistan and Yemen. Duishon’s area of interest include educational reforms, rural education and equity, teacher education, curriculum development, education quality and student assessment. Duishon is a winner of the NU Inaugural NU Master Teacher Award in 2020, Leadership in Teaching Award in 2019 and Innovative Teacher in 2018. In 2019, Duishon got a medal “Excellence in Education” from the Ministry of Education and Science of Kyrgyz Republic. In 2020, he got a medal “Altynsaryin” from the MOES of Kazakhstan. 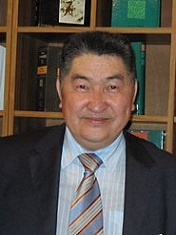 Tyntchtykbek Kadyrmambetovich Tchoroev (Chorotegin) is a Kyrgyz historian, publicist and journalist. President of the Kyrgyz History Society (elected on 11 February 2012), Doctor of History (1998), Professor of the Kyrgyz State National University named after Jusup Balasagyn (2002). Tchoroev is well known as an independent history researcher, Turkologist and journalist. Until September 2011, he worked as a broadcaster at Radio Azattyk, i.e. Kyrgyz Service of Radio Free Europe/Radio Liberty (he was Director of the Kyrgyz Service between 1 January 2003 and 30 September 2010). He was chairman of the Board of the Muras (Heritage) Foundation under the Office of the President of the Kyrgyz Republic (between 30 August 2013 and 4 May 2017). 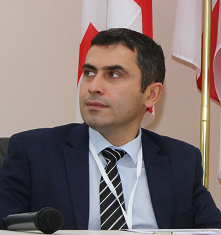 Valeri Modebadze – Professor of International Relations and Politics, Doctor of Social Sciences was born in 1977 in Tbilisi.

In 2002 – 2007 He studied Law at Sokhumi State University and earned his bachelor degree in jurisprudence. 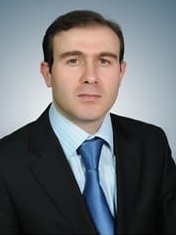 Abdulselam Arvas was born in Hakkâri (eastern Turkey). He completed his primary and secondary education in the same city. He graduated from Chukurova University, Faculty of Education, Department of Primary Education (2002). The author received his master’s degree from Yuzuncu Yıl University, Institute of Social Sciences, Department of Turkish Language and Literature, Discipline of Turkish Folk Literature with his study titled “Van Minstrel Tradition/Text and Analysis” (2005); and completed his doctorate at the same university with his thesis named “The Book of Dede Korkut and Kipchak Field Epic Tradition” (2009).

The author worked as a teacher and administrator in public schools of the National Education between 2002-2007 in city of Van. He started working as an assistant at Gaziosmanpaşa University, Faculty of Arts and Sciences, Department of Turkish Language and Literature in 2007. A. Arvas, who later resigned from this university, worked as an Instructor and Lecturer at Kyrgyz-Turkish Manas University between 2008-2011. He was appointed as an “Assist. Prof.” to the Faculty of Letters of Chankiri Karatekin University in 2011. Arvas became an “Assoc. Prof.” in 2014. Between 2013 and 2014, he carried out the project titled “Shamanism of the Khakass” supported by TUBITAK in the Autonomous Republic of Khakassia (Russian Federation). A. Arvas became a professor in 2019.

Author has published a great number of articles (47), book chapters (12), papers (30) and encyclopedia articles (11) so far. He was “de facto” editor of Karatekin Faculty of Letters Journal (KAREFAD) for three years. A. Arvas who the Director of the Turcology Institute of Chankiri Karatekin University has 11 published books (7 copyrights, 2 translations, 2 editorials).

More about the Symposium